A couple of months ago, my brain got stuck on an idea. My brain often does that, and I can't really be at ease until I even try to realize that idea (this blog is definitely one of them). So, I went about uneasy for a good couple of weeks until I gave in: I decided to get myself a netbook. For coding.

When researching on which I'd be interested in, I had a list of things that it must fulfill:

The price and a good keyboard were by far the most important criteria. Since no netbook manufacturer had the courtesy of answering my queries on review units, the price needed to be in the "justifiable to the wife" category. Also, as the computer was intended for coding, thus heavy typing, the keyboard must be comfortable to write with.

There were a couple makes and models that I narrowed my list down to, but ultimately ended up choosing the Samsung N220. 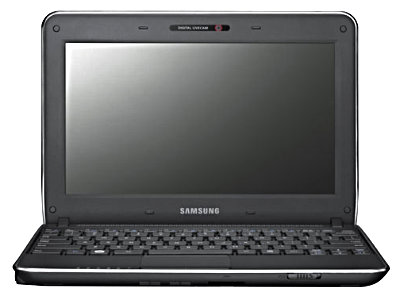 The web is full of reviews of this computer so there's no need I'd need to go into the unboxing-speclisting-walkthoughing routine. The point of this review is to test whether it's suitable for writing code.

But there's something I need to tell you before I go there: I love the computer's size and weight. Some reviewers say it's both heavy and bulky because it has a 6-cell battery, which bulges out a bit at the underside. Well, that's one of the things I totally love about this little thing.

The added weight of a 6-cell battery, compared to the common 3-cell battery is not a problem for me. It's still lighter to carry around than my DSLR. Besides, the bulge makes the computer stand on a slight edge, making typing more comfortable. Most importantly, though, the battery-bulge is a perfect grip for the computer; if I grip the computer's hinged edge so that the top of the computer rests on my forearm's underside, and my fingers wrap around to the underside, the grasp is firm, secure, and perfectly balanced. Not to mention that 6 cells is, like, 100% more than 3. Totally awesome!

After fully committing myself to writing code (for Bob, no less) solely with what the netbook came with (excepting listening to music via headphones), there are four main things that probably matter the most to a programmer:

So, I had my hesitations. In fact, this was the biggest thing that I felt scared of in a netbook; while Eclipse doesn't have much chrome in its UI, you really can't have too much screen estate in use when programming. 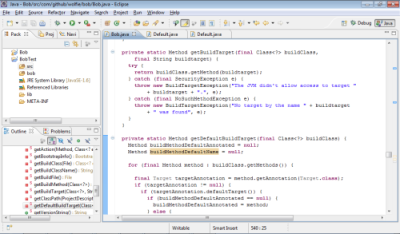 The workspace configuration for Eclipse at the netbook's full resolution.

But I was pleasantly surprised with how well it sufficed. As seen in the screenshot above, side-by-side comparison can be kissed goodbye and the method overview is a bit cramped. Also, anything other than full-screen mode is out of the question. But otherwise, for me, it's totally usable and didn't really even require getting used to, as long as line length is kept in the 80-characters' vicinity.

Since the screen is so small, the keyboard must be as small. If I put my palms on each edge of the keyboard and extend my thumbs, they overlap about half the thumbs' lengths. So, it's nothing compared to an ergonomic split layout keyboard, but it could be considerably worse.

The keys are flat rounded squares protruding about a millimeter from the keyboard base, just like the modern Apple keyboards. Their touch and feel is excellent. Although the keys are somewhat crammed together, once my hands have settled into their native positions, I haven't missed any keys I shouldn't miss.

I say "shouldn't miss" with great intent, since there are some totally wonky key placements. Mind you, I have a Finnish keyboard layout, so your mileage will vary on the following.

For a coder that likes his generics, having the '<' and '>' key moved from the left side of the keyboard to the right is very jarring, and hard to remember (not to mention hard to type). Also, the delete key is above backspace, in the upper righthand corner, not to the right of enter, as in full-size keyboards. But this I've already grown used to.

But perhaps the most disruptive key (mis)placements on this computer are the page up/page down and home/end keys. The cursor keys have their usual 1+3 matrix, but pgup/pgdn have been placed on either side of the up-key. Additionally, as home/end are on these same buttons, activated by a Fn-key, this leads to a huge amount of mis-scrolls.

It's not uncommon for me wanting to go up just one line, but accidentally pressing the page-up button, losing my orientation completely. The keys are exactly the size of my index finger's tip (about 1cm wide, two thirds tall), so it's very easy to double-press when intending to move the caret left or right.

Using the right hand's pinky finger might be be the fastest to use the cursor keys, but since pressing them is such a precision art, I'm always forced to lift and move my right hand for that activity, making it slow and cumbersome.

But, I want to emphasize, that these are the only negative things I have to say about the keyboard. For such a form factor, I'm amazed.

Being used to my MacBook Pro's ample trackpad, this thing is crap.

If you are a person who avoids trackpads, this will be a waste of space since you will avoid it like the plague. It's small and it's inaccurate. Merely keeping your finger tip on the trackpad, and shifting the finger's weight without even tilting the finger will make the cursor move a lot. There's also some two-finger gestures, and even a three-finger gesture, but it's very clunky, unresponsive and unreliable.

I, however, have no problems with trackpads, so choosing between carrying around an external mouse or using the trackpad, I'll choose this trackpad. Even though it's inaccurate, it's still faster and more convenient to use than lifting the whole arm when switching between keyboard and mouse. It's just the lesser of two evils.

Even though I really dislike those red dotty things ThinkPads love, those might thrive in this form factor, because they require so little physical space. The trackpad's mouse buttons are currently ridiculously thin, so getting rid of the trackpad would allow for those buttons being considerably larger and click-friendlier.

All-in-all, the trackpad is the weakest spot in this computer, by far.

The laptop comes with 1GB of RAM installed. Since Windows 7 is pretty decent in its memory usage, and there wasn't terribly much bundleware upon startup, it was enough for doing the netbook-y stuff; having a browser and a few other windows open was no problem.

But as soon as Eclipse entered the game, everything went sluggish. Keeping Eclipse in the background for a while and then swapping back took a good minute to get it going again.

Luckily for me, and decent of Samsung, the memory is very easily replaced with a max of one 2GB SODIMM chip. Unfortunately, this added 50€ to the price of the laptop, making the total cost of ownership 400€. After I installed the 2GB memory, I've been able to use the computer without inhibition. Eclipse now runs as smoothly as anything.

So, I just explained in detail what I think of the screen, keyboard, trackpad and memory for programming purposes. I'll now give a quick skim over the rest that might matter.

I've always thought that the Atoms are just slow as molasses, and should be avoided at all costs. Lo and behold, it turns out that I was very wrong. Aside from having trouble playing high-res flash video (i.e. a 480p YouTube video at full screen), I've seen no unexpected choppiness or slowness in my use. It's actually very good, even for programming.

A laptop should be portable, otherwise it's just a computer with a battery. This, indeed is portable. It's even more portable than my MacBook Pro is – all 5 inches more portable. Size and weight indeed do matter in this case. Taking the netbook anywhere and everywhere with you is a no-brainer. The battery life doesn't make me even consider taking the charger with me, and it's just so light and small that it's not really something I even consider "carrying around", it just comes right along. It takes very little tabletop space, so pretty much any area that is enough to be called "a surface" is enough. Also, lifting it effortlessly with one hand from the coffee table to the sofa, wherein I lie, makes it so much more attractive for casual use.

Glad I Tried It

Another great worry I had was whether or not I'd still use the netbook after this little experiment. While 400€ isn't terribly much, it's not so little that I'd spend it willy-nilly.

I'm glad I took the chance, since I now consider it as my primary laptop. The Mac laptop on my desk (incidentally, currently underneath the netbook, as I write this post) as merely an underventilated computer with a battery.

The ultimate answer is a resounding "yes", a netbook can be used for programming. I say this without any kind of hesitation. I wouldn't use it as the primary coding computer, but certainly as a mobile back-up.

Whenever I expect being bored and stationary for a longer period of time, I'll surely take with me the little Sammy that could.

who is this guy?

Hi, my name is Henrik Paul. I'm a professional software developer from the little city of Turku, Finland. I currently work for Vaadin in the R&D department.

You can also find me on Twitter, Stack Overflow and IRC ("Wolfie" on IRCNet & Freenode).

In short, as long as you mention my name (Henrik Paul), link back to the original article, and don't make money off of it, you're free to do whatever you want with what I write here.